Mylan is recalling EpiPens (epinephrine injections) and EpiPen Jrs due to potential defects. A defective EpiPen may require unnecessary force in order to deploy medicine, or in some cases, the device may altogether fail. Epinephrine, the drug injected by an EpiPen, is first aid treatment for an individual undergoing anaphylactic shock, or life-threatening allergic reaction.

The recall was originally limited to Australia, New Zealand, Europe and Japan but has since expanded to include the United States. Outside of the United Stated, there have been two cases reported of individuals whose EpiPens failed during emergency situations. Both patients, fortunately, were able to use alternate EpiPens in order to obtain treatment.

Both faulty EpiPens came from the same lot, but additional lots are now being recalled out of precaution. The potentially defective EpiPens were distributed between December 2015 and July 2016. Recalled lots in the United States are listed below.

The image below indicated where to find the lot number on an EpiPen package. 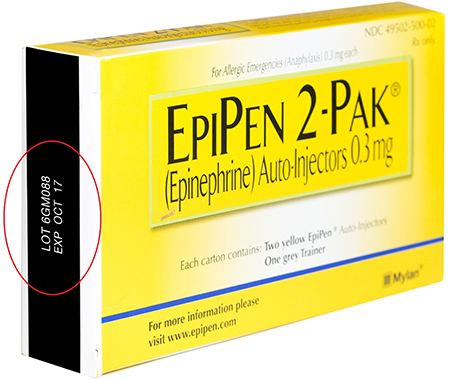 Patients carrying recalled EpiPens are encouraged to return them for replacements, free of charge. The manufacturing company can also be contacted via 800-796-9526 or customer.service@mylan.com.

Just under two thousand packages of Season’s Choice Frozen Peas are being voluntarily recalled due to potential Listeria monocytogenes contamination. Listeria infections can be serious or even fatal in young children, the elderly, or other persons with weakened immune systems. Symptoms include high fever, nausea, stiffness, severe headache, abdominal pain, and diarrhea. Pregnant women who are infected with Listeria may suffer miscarriages or stillbirths.

Consumers may returned recalled products to place of purchase for full refunds.

On April 2, Conagra initiated a voluntary recall of its Hunt’s Chili Kits due to potential Salmonella contamination of the chili seasoning packets. Symptoms of a Salmonella infection include abdominal cramps, fever, and diarrhea. An otherwise healthy individual may recover without treatment, although some cases of severe diarrhea lead to hospitalization. Salmonella infections pose the greatest risk to infants, the elderly, and others with weakened immune systems.

The recalled chili kits were distributed in retail stores and online, as well as through military commissaries, across the United States. Identify a recalled product via UPC and Manufacturing Lot Codes.

The below picture demonstrates where to find the information that can be used to identify a recalled chili product. 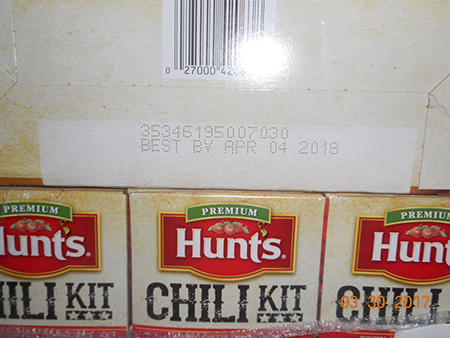